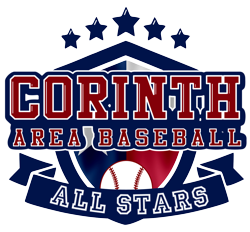 Head Coaches and Players:  Please do not volunteer or tryout if you will not be able to fulfill these All-Star requirements.

COACHES WILL BE SELECTED AFTER GAMES ARE RECORDED ON MAY 8.

·         The All-Star head coach will be the 1st place head coach of the age division played in the regular season. If there is a tie, the tie breaker will be determined by the team that has the fewest runs allowed during the season.

·         If the coach declines the invitation, the next coach in line will be offered the team.

·         A head coach cannot be the head coach for multiple All-Star, Select, or other tournament teams during the same tournament season.

·         All teams that have a chance to finish in first place must play the same amount of games prior to All-Star coaches’ selection.

The All-Star coach position is an important role.  Coaches serve as ambassadors of the League and represent the City of Corinth.  It is expected that the coaches will demonstrate professionalism and sportsmanship reflective of CAB values in all contexts and interactions while in the role.  The board has the authority to replace coaches should these expectations not be upheld.

·         Players must try out for All-Star teams in the same age group they participated in that qualifying Spring season.

·         The board will distribute a master ballot sheet from all the nominated players in that division on Friday, April 30.

·         The coaches’ voting results may result in numerous players selected or none. This will be announced by the board Friday, May 7, 2021.

·         If a player receives over 50% in votes, he or she will automatically make the All-Star team and does not need to tryout.

·         The Corinth Crushers Select Director has the responsibility for selecting the drills the players will need to demonstrate during the tryout. The skills will be instructed with the help of select coaches (if available) and evaluated by the All-Star head coach.

·         Any player named to an All-Star roster cannot participate on another CAB All-Star team tournament that season without written approval by the League Commissioner.

Tryout dates and  times will be posted on the league website. Under no circumstance can All-Star activities interfere with any recreational game, league championship tournament game or scheduled events.